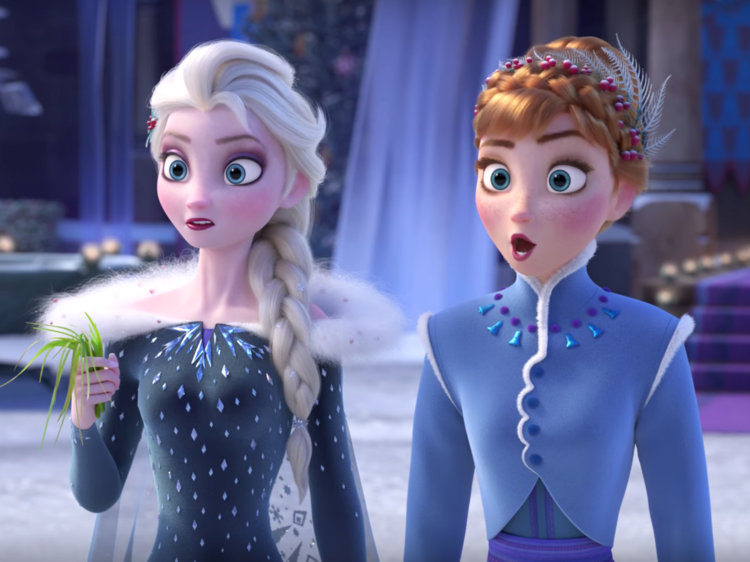 Elsa and Anna in “Olaf’s Frozen Adventure.”Disney
Pixar’s new movie “Coco” has a 21-minute “Frozen” short playing in front of it in theaters.
People have been surprised and subsequently furious by this unusual move.
The Olaf-centric “short” plus regular trailers means “Coco” begins over 40 minutes after a theater’s listed start time.
Though fans of “Frozen” will like the short, Disney should have just released it separately.
Pixar’s stunning new movie “Coco” has already had a successful opening week over the Thanksgiving holiday in the US, but the film’s debut hasn’t been without controversy. Disney made the unique decision to pair “Coco” with a new 21-minute long “Frozen” featurette starring Olaf — and people are pissed.

Why the “Frozen” short is so unusual to begin with

“Olaf’s Frozen Adventure” is an outlier when it comes to the short films typically played before Pixar movies in theaters. For one, it was produced by Walt Disney Animation Studios — not Pixar. Though the companies are connected, the two studios’ movies and shorts are typically kept separated. 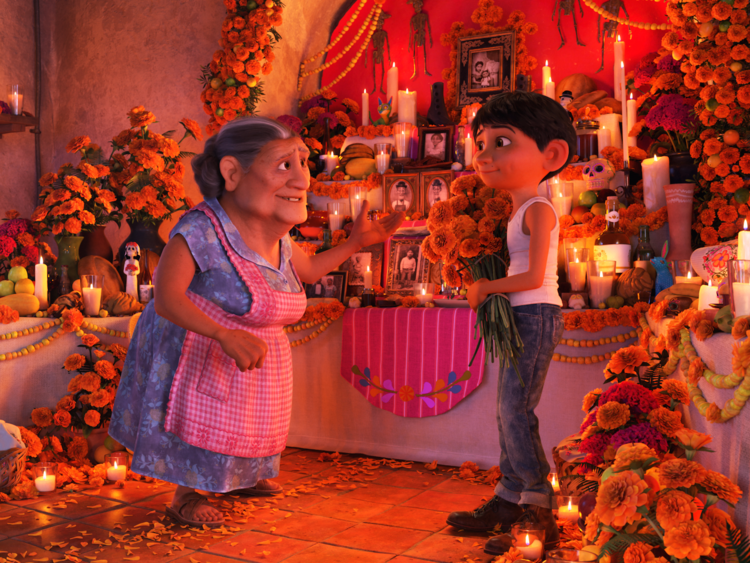 “Coco” is a fantastic and heartwarming new Pixar movie.
Then there’s the 21-minute runtime of “Olaf’s Frozen Adventure.” That length, especially for an audience who might not be expecting a “featurette” (as Disney calls it in press releases and trailers), is downright confusing. Combine it with the trailers and usual theater advertisements for rewards programs or warnings about cell phone use, and “Coco” is starting more than 40 minutes after the theater’s listing times.

Here’s a sample of how critics and regular moviegoers reacted to “Olaf’s Frozen Adventure”:

Coco is spectacular but unfortunately the Frozen short that precedes it will eat your brain from the inside, then spit the amygdaloid rind that remains thereafter down your throat.

I’m going to say it, since no one else will. The Frozen short in front of Coco is a giant piece of frozen shit. Olof made me want to punch myself in the face.

BEWARE, If you're taking your kid to "Coco" there is a shitty 21 minute "Frozen" short beforehand. It's annoying and bad.

The 21-minute Frozen “short” before the spectacular Coco might be the worst thing Disney has put its stamp of approval on in ages.

The seemingly endless, deeply mediocre Frozen 'short' they force you watch before CoCo is a hate crime

#Coco was one of the best movies of the year!

Conversely, the #Frozen short that preceded it was one of the worst attemtps at visual media that has ever been created

OLAF’S FROZEN ADVENTURE filled me with rage. In addition to representing the worst elements of the crass commercialization of Christmas, the songs were lackluster, the plotting is painfully cliched, and Olaf is annoying as shit.

That is significant for the non-US field office, considering “Coco” is currently the highest-grossing movie ever in Mexico. INSIDER come to out to Disney for comment, but didn’t immediately hear back again.

But the brief wasn’t as bad when i was expecting

“Olaf’s Frozen Excursion” had not been proven to critics who went to early on press screenings of “Coco.” So Thanksgiving weekend, I noticed the movie for another amount of time in order to comprehend what all the fuss was about with the Disney “short.”

After reading about the backlash to the brief for a couple of days, I was well prepared for the most detrimental. But “Olaf’s Frozen Excitement” was a lovely and well-crafted follow-up to “Frozen.”

The mini-movie says the storyline of Elsa and Anna celebrating their first Holiday in Arrendelle because the incidents of “Frozen.” If they realize they haven’t any family Christmas practices to help them enjoy, Olaf continues on his “frozen experience” in a misguided work to help find a custom the sisters can co-opt. 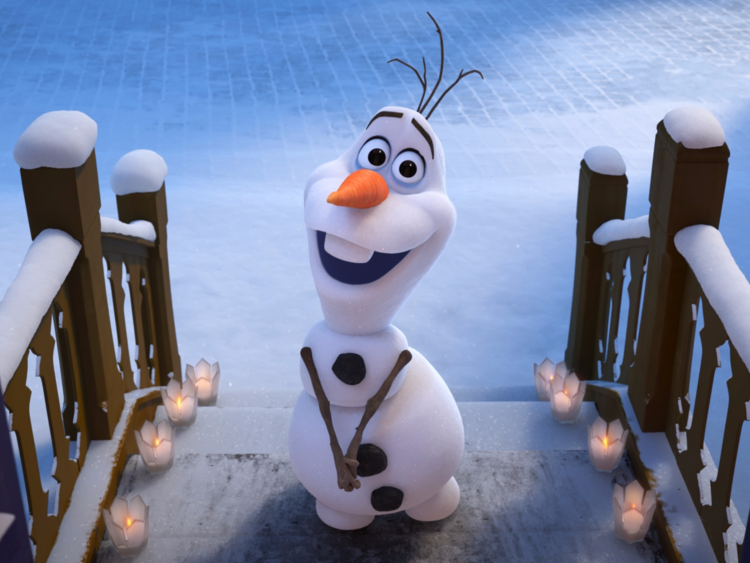 Olaf should go door to door, studying family holiday customs in Arrendelle.
The storyline is just a little vulnerable, and the four track interludes are unnecessary. None of them of the music stacks up to the initial music in “Frozen.” But if you were a supporter of the initial Disney movie, and Olaf specifically, then the laughter and lighthearted holiday note will resonate together with you.

The computer animation and design for Elsa continues to be gorgeous.Disney
Plus, the computer animation is stunning. I wouldn’t be shocked if Disney wished to create this brief just to showcase the incredible making of Elsa’s new winter dress, filled with a fuzzy white scruff of the neck i couldn’t stop looking at although it was on display screen.

Why the runtime is the “Frozen” short’s biggest issue

The backlash Disney has inadvertently brought on is stemming from the indegent advertising. IT advertisements I’ve seen for “Coco” don’t refer to the 21-minute long “Frozen” brief, and even the immediate trailers for “Olaf’s Frozen Trip” neglect to talk about a runtime.

That alone isn’t odd. It might be peculiar for Disney to state, “Hey, just and that means you know, this ‘featurette’ has ended 20 minutes long so plan consequently.”

However the choice to ditch the most common six-minute original Pixar brief and instead supply a slow mini-sequel to “Frozen,” Disney made a significant miscalculation.

My seat tickets were for a 10:15 a.m. teaching of “Coco” at an AMC cinema, which listed the full total runtime as two time and eight minutes. The previews started out at 10:16 a.m., and we were shown seven trailers for approaching movies.

“Olaf’s Frozen Excitement” started out at 10:34 a.m, and “Coco” didn’t commence until 10:56 a.m. — more than 40 minutes after my ticketed start time. The movie finished at 12:33, ten minutes past AMC’s publicized run time (but we didn’t stay through the entire credits). 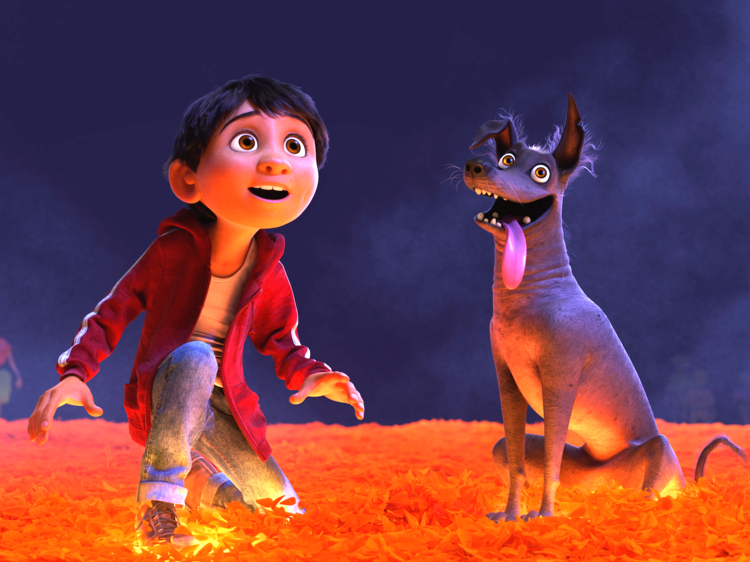 “Coco” is a groundbreaking film for Pixar.
For families heading to the films with young kids (and their brief attention spans), the runtime of “Olaf’s Frozen Excursion” may lead to confused small children who hardly understand what movie they’re said to be watching. And for just about any audience member who didn’t like the initial “Frozen” movie, seated through 21 minutes of Olaf before witnessing “Coco” can understandably cause stress.

Then there’s the much more serious criticism being leveled at Disney’s choice. “Coco” is the first Pixar feature film to give attention to a non-white protagonist, sharing with the storyline of Mexican Dia de los Muertos practices through the zoom lens of the young Miguel and his long term dream of participating in music.

As a few of these tweets suggest, a lot of people think Disney may have been worried that “Coco” would are unsuccessful at drawing followers in its starting weeks. Would people still buy seat tickets to a Pixar movie that didn’t star anthropomorphized toys and games or cute pets or an all-white group of human protagonists? It is possible Disney wasn’t persuaded.

Some consider Disney may have thought that the added benefit of “Olaf’s Frozen Excursion” would ensure success for “Coco,” but instead the featurette has only been successful in acquiring the ire of moviegoers while “Coco” itself is a box-office strike that critics are raving about.

The next time, Disney should adhere to the traditional parting of its animated strikes like “Iced” and the initial works of Pixar.